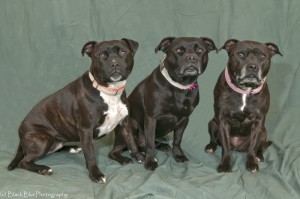 “John Ward helps me train two out of three of my dogs, Sally in agility and Lexie in obedience. The older one just chills and I think laughs her head off at the very idea of EARNING a treat or praise ,But when the treats come out she’s first in the Q. It was recommended to me by one of John’s colleagues (Siobhan Owens) to take Sally to Agility to burn up some of the huge amount of energy she has, and help her use the very clever brain. Lexie on the other hand is totally different with not so much energy but still a clever girl so obedience is just great for her. Lexie didn’t start obedience until she was six so with the guidance and patience from John you can definitely teach an old dog new tricks. We have even competed in obedience competition and even though we didn’t win anything the judge said she was a JOY TO WATCH and that’s thanks to John for not giving up on us. Sally was as mad as a brush when she came to live with us and we couldn’t even look at her as she would just jump all over us, Agility has most definitely changed Sally for the best and it has made her a much happier dog. We have also competed in Agility and we are just about ready to take on the world !!!!! But the best of all is every time I take my three dogs out for a nice calm controlled walk I’m a winner. The people in John’s classes are the nicest and most encouraging people you could meet. So thanks a million John for the encouragement and the patience.”